The slow cooker works perfectly on  days where the afternoons are filled with activities and appointments, you can place all your ingredient in the crockpot at lunch time, set the timer and have dinner ready by the time you come home later on. I fully understand why so many people eventually invest in more than one slow cooker. They really are very handy and entertaining for culinary creativity. . The recipes vary from your most common stews and soups to cheesecake! Since I am not expert on this cooking device, I am starting with  basics, and so far have been impressed with the results.

I was given  a 6-quart slow cooker, a basic model with a low and high mode only. It Has no timer and no options, so  now I am tempted to invest in, one with a timer and maybe a different size as well. Cooking stews and soups so far has been my favorite use of the pot; today I am sharing a modified Thai Chicken recipe.  With this one, you can throw all the ingredients at once in the pot, turn on for 3 to 4 hours and forget about it. My children aren’t huge fans of chicken, but when I added  Once Again Peanut Butter to it, they were  excited to try it, and that alone was a huge win in my house. The sauce for this recipe calls for peanut butter and soy sauce, which really delivered on flavor while keeping the chicken juicy and soft. To speed up my prep time the second time around making this recipe, I used a frozen blend of chopped onions, red peppers, green peppers, celery and parsley, which I added to the cooker while still frozen, and it worked wonderfully. We served it over sprouted brown rice but you can also use noodles when in a rush, since they take much less time to cook. You will have your meal on the table in 15 minutes or so after the slow cooker has done its job. Note this recipe doesn’t have any added salt or oils either! So, it’s perfect for those watching their sodium intake and managing their weight.

I will continue to experiment recipes with my slow cooker, but would love some advice, suggestions and tips for you all out there. Please comment on this blog and I will start working on some new creations combining my new favorite kitchen gadget and our amazing Once Again Nut Butters! Check out our online shop here. 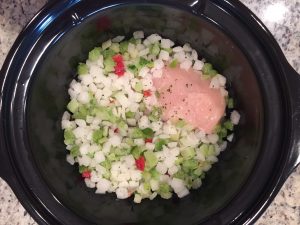 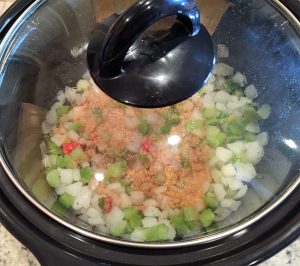