Ready for some No-Grain Pumpkin Brownie? We value our social media connection with our fans very much! It is where we have the privilege to get to know you and learn a little bit about your likes and dislikes. Recently, we noticed a trend of several people tagging pictures and using the hashtag “paleo diet.” Many of our recipes already fit into the paleo diet standards, but we wanted to build one  that especially follows the paleo way of living.

That required us to look more deeply the paleo diet. Let us clarify that we don’t believe this diet to be a good option for all people but understand some have chosen it and garnered  great results. We encourage each one of you to do your own research and determine if it is something that fits your health goals. In addition, it is always a good idea to discuss this diet with your doctors who know your medical history and may have individualized recommendations for you.

The paleo diet, nicknamed the caveman diet, attempts to mimic our ancient ancestor’s way of eating. The diet avoids foods that come from modern agriculture, such as wheat, dairy, legumes and rely instead on meals full of meat, nuts and vegetables. The concept became popular when Dr. Loren Cordain published a book, The Paleo Diet in 2001. The idea is to eliminate foods that may contain possible irritants to our gastrointestinal tract. There isn’t scientific research (that we know of at this point) that credits this diet for any health advantages over a balanced way of eating. However, as we stated before, we know it may work for some people. And as  long as they are monitored by their doctors regularly, and there are no adverse  effects, then going paleo  is a personal choice. Either way, we love to contribute with delicious recipes that will fit into paleo  plans!

The paleo diet excludes legumes, and since peanut is technically a legume, peanut butter is not included in their list of foods allowed. However, we have encountered some people who follow modified paleo diets that do include peanut butter. The other products we offer, including cashew, almond, tahini and sunflower seed butter are all paleo- friendly products.

Regardless of your food restrictions or dietary plans, this No-Grain Pumpkin Brownie recipe is fantastic and worth a try! It is rich in protein, fiber and low in refined sugar. They make perfect treats for  before or after workout  fuel, and works really well as a weekend, treat too! Try one of our other pumkin recipes such as our Pumpkin Chocolate Chip Cookies found here. 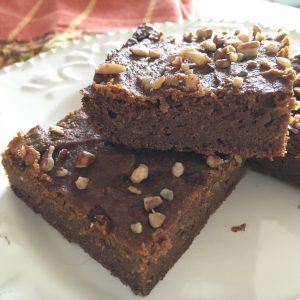